Entering the final weekend of the 2021 MLB regular season, the playoff picture is finally becoming clearer. While there are still a couple of spots to be determined, let’s look ahead at how the postseason might play out.

With the two wild card spots secured in the West and Central divisions, the East is now winner takes all. The Atlanta Braves have a 2.5 game lead on the Philadelphia Phillies with seven and six games remaining, respectively. Whatever else happens this week, it’s likely to come down to the last series of the season when the Phillies make the trek to Atlanta for a three-gamer.

The fact is the Braves have been playing very good baseball since the All-Star break. Their success can be attributed to the trade deadline additions of Jorge Soler and Adam Duvall, both of whom have made major contributions. With home-field advantage for the last series, it’s hard to imagine the Braves folding.

The main reason for the NL East season-ending cliffhanger is the 17-game winning streak the St. Louis Cardinals rode to secure the last wild card spot. Can they keep up the heat in the postseason?

NL Best Are In The West

In the NL West, it’s a straight fight between the two dominant rosters in all the National League. The San Francisco Giants still have a two-game lead over the Los Angeles Dodgers. With home-field advantage through the NL playoffs on the line, both teams are fighting fiercely to win the division. The advantage has to go to San Fran with three games remaining at home against the struggling Arizona Diamondbacks and three games against the San Diego Padres at home. 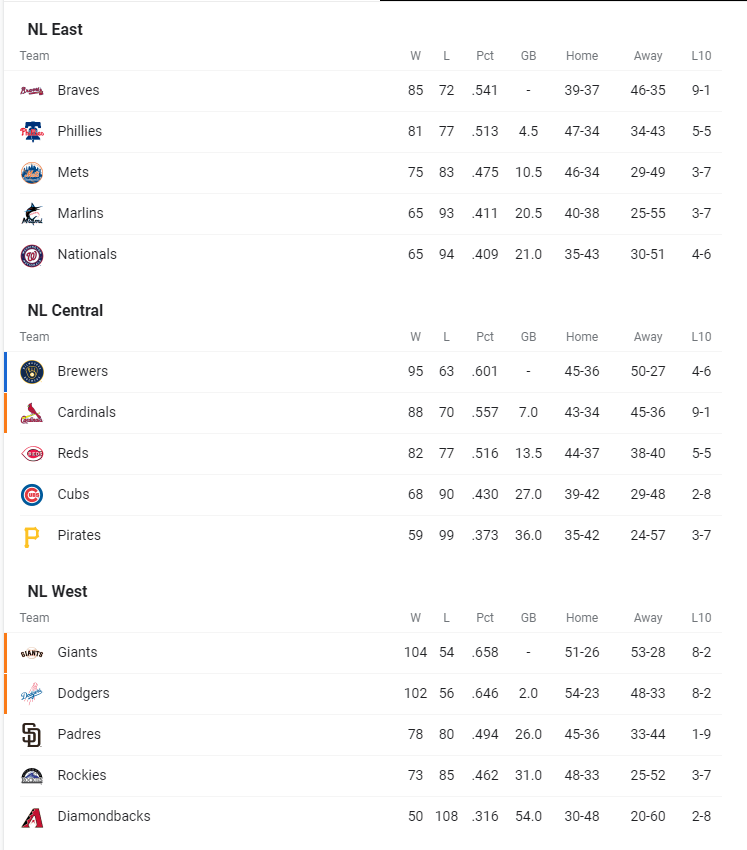 At this point, it looks like the Dodgers and Cardinals will face off in the Wild Card game. That’s a potential problem for the Cardinals. In a one-game series, the Dodgers would have to go with Cy Young candidate Max Scherzer on the mound. Since coming to the Dodgers before the trade deadline, he has posted a record of 7-0 with a ridiculous ERA of 1.43 and WHIP of .71.

If the Cardinals remain hot, anything could happen. But having the best pitcher in baseball on the mound in a do-or-die situation offers a huge advantage.

The Dodgers should move on. At that point, the NL Pennant should come down to the two NL West teams, the Giants and Dodgers. For what it’s worth, the two teams pretty much split head-up games during the season with the Giants holding a slight edge at 10-9. With a little better pitching via the addition of Scherzer, the Dodgers might be slight favorites to win the NL Pennant.

Division titles in the America League have been pretty much settled with the Tampa Bay Rays taking the AL East and the Chicago White Sox easily taking the AL Central. The Houston Astros lead the AL West by 5.0 games with six to play. Although the Seattle Mariners are still chasing hard, there might be too much left for them to do.

The real battle is for the two spots in the AL Wild Card game. After a three-game sweep of the Boston Red Sox, the New York Yankees have a 1.0 game lead for the first Wild Card spot with Boston sitting in second. However, the Toronto Blue Jays are only 1.0 back with Seattle still in contention at 2.0 games back. Even the Oakland A’s have an outside shot at the Wild Card, being only 3.0 games back. 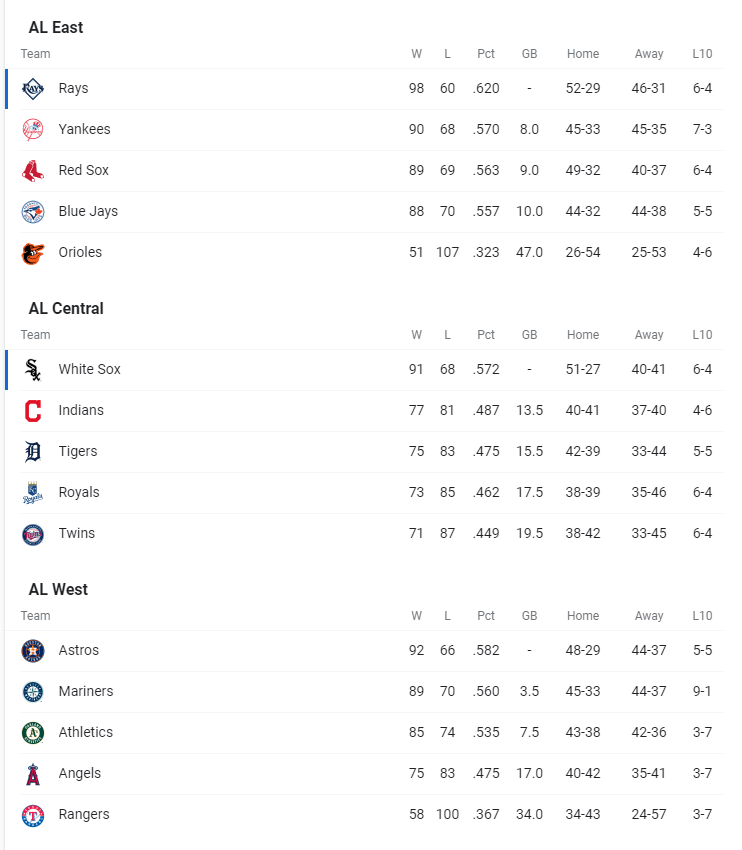 The Yankees will travel to Toronto for three games before having the misfortune of playing Tampa Bay in the last series of the regular season. Boston has six games on the road against two of the worst teams in MLB. That bodes well for their chances of getting a Wild Card spot.

After facing the Yankees, the Blue Jays get the Baltimore Orioles at home. That’s a plus. Seattle has five games remaining at home versus the A’s and the Los Angeles Angels. With arguably the worst offense in baseball, the Mariners catching two teams from the AL East looks unlikely.

The Red Sox should get in. That makes the three-game series between New York and Toronto of vital importance. On the season, Toronto holds an 8-5 advantage. We’re inclined to think the young bats in Toronto will be too much, putting Boston and Toronto in the Wild Card game.

So after all that focus on the AL East, what about the White Sox and Rays? The reality is both of these two teams have been among the most reliable in baseball this year.

The Rays have the 2nd best offense and 4th best pitching staff in the AL. Week after week, they play like a well-oiled machine. They have also been awesome at home, which matters because they will have a home-field advantage throughout the AL playoffs.

So on paper it could be the Los Angeles Dodgers facing the Tampa Bay Rays in the World Series. Of course, the baseball playoffs aren’t played on paper and the numbers don’t tell the full story.

Betting Lessons From The First Two Weeks Of NFL Action