This week all eyes in the golfing world turn to Whistling Straits, Wisconsin as the Ryder Cup circus comes to town. It is a unique event in the golfing calendar as individual rivalries are set aside for the team format. At least that’s the theory. With the USA dominating the Official World Golf Rankings (OWGR), most pundits are expecting the home team to win. The overall betting reflects this expectation: 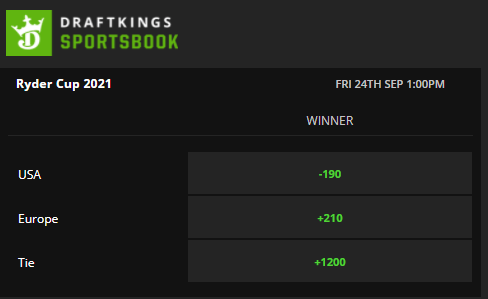 Of course the European team have caused numerous upsets in the past when on paper they were outmatched individually. The Ryder Cup seems to bring out the best in them. At the same time America’s superstars like Woods and Mickelson have not always found the team format to suit them. But this time it looks like the powerhouse collection of individual talent on Team USA will be too much for Europe.

8 of the top 10 men’s golfers in the world in the OWGR are from the USA. Only one is European, although it is a notable one in Jon Rahm. He is currently World No. 1 and if Europe has any chance of causing another surprise they will need him firing on all cylinders. It doesn’t look like he has enough teammates in form.

Rory McIlroy would normally be a points banker for Team Europe but he has drifted out to No. 15 in the rankings after a year of indifferent form. Sergio Garcia is playing well but still had to rely on a wildcard pick to make the team. Ian Poulter, aka “the Postman”, will go down as a European Ryder Cup legend but can he deliver once again on a course as long and tough as Whistling Straits?

Opposing them you have the likes of Bryson DeChambeau, Patrick Cantlay and Justin Thomas. These are the guys who are at the top of the PGA Tour leaderboards week after week. The USA even have the luxury of naming a rookie, Collin Morikawa, who is already a two-time major winner. The strength in depth is truly impressive.

Leading the teams, Steve Stricker and Padraig Harrington are by all accounts two of golf’s good guys. Stricker, a Wisconsin native, seemed a natural choice to lead his country in his home state. A good friend of Tiger Woods, his unassuming personality belies a steely competitor.

On the other side, few in golf have wrung more from their natural abilities than Harrington. He is a three-time major winner, including back to back Open Championships, and one of the great thinkers of the modern game. With these two men in charge the matches will no doubt be played in a sporting manner. But beneath it all, both captains will be desperate to win.

So what about that theory that individual rivalries might be set aside for the Ryder Cup? The USA better hope so because they have a genuine feud between two of their top players. Brooks Koepka and Bryson DeChambeau have been engaged in an ongoing social media spat which could give Team Europe some hope that the vital chemistry needed for the fourballs and foursomes might be threatened. Stricker has poured oil on any suggestion it will undermine his team’s efforts this week. Although he did state the obvious when he said it was unlikely they would play together.

If Europe can take any further consolation at the daunting odds they are facing it will be simply that they have done it before. For decades the USA completely dominated the Ryder Cup but since 1985 Europe have taken home the coveted trophy in 12 of the last 17 editions. This one does feel different though. Europe’s best players are either out of form or past their prime. Team USA is hungry and dominant in the world rankings.

Last time out, in 2018, Team Europe took full advantage of home field and cruised to a comfortable win. We expect Team USA to do similar in Wisconsin. That -190 looks a decent value bet.

Betting Lessons From The First Two Weeks Of NFL Action